Kenya is one of the best countries in Africa to film Rhinos. For many years across Africa, big game hunting has drastically reduced the numbers of Rhinos. Kenya is home to both the Black Rhinos and White Rhinos including the only two remaining white Rhinos in the world. Kenya was home to at least 20,000 black Rhinos but for the last two decades, this number has been reduced to less than 300 due to poaching. As a result of increased conservation efforts, the black rhino population is steadily recovering and now there are over 600 black rhinos in Kenya. The Northern White Rhinos came closer to extinction in 2018 when the last known living male called Sudan died in March 2018 at Ol Pejeta Conservancy. Kenya now has the only two surviving white rhinos in the world making them the world’s most endangered mammal that is the mother and daughter called Najin and Fatu these live under 24-hour armed guard at Ol Pejeta in central Kenya. In Kenya Black, Northern, and Southern White Rhinos can be filmed in their natural habitat as well as conservancies. Here are the best places to film Rhinos in Kenya. 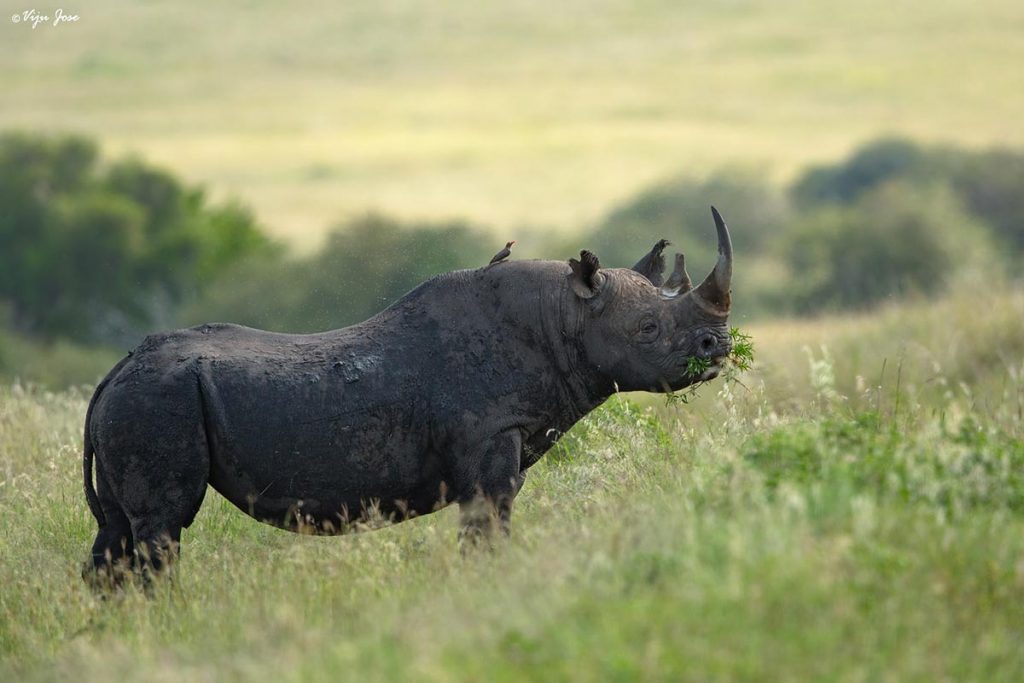 Mara is one of the finest wildlife destinations in the world. The reserve offers excellent chances of filming the Rhinos and other wildlife including the great migration which happens every year in July were over 1.5 million wildebeests along with large numbers of Zebras and Thompson’s gazelle, migrate from the Serengeti plains in Tanzania to search for fresh pastures in the Masai Mara before going back in October. You will have a chance to film lions and cheetahs as they hunt during the migration.

Tsavo National Park is the largest National Park in Kenya it was established in 1948 and it is commonly known as the Theatre of the wild. The Park is divided into East and west intersected by the Nairobi to Mombasa railway and road. The park has interesting and diverse habitats, wildlife, and Scenic Mountain landscapes. It is another great place to film Rhinos in Kenya.

Amboseli National park is surrounded by the Kilimanjaro Mountains; the park is home to the Big 5 animals. Filming Rhinos in this park will give you superb pictures with Kilimanjaro as a backdrop

Lake Nakuru is one of the beautiful national parks in Kenya, with its alkaline lake home to the pink flamingos you also have a great opportunity to film rhinos.

Requirements to film rhinos in Kenya

You will need to get a filming permit from Kenya Film Commission for you to be allowed to film rhinos in Kenya. In order to obtain a Filming Permit, one must write a letter requesting for the filming permit and fill an application form which must be accompanied by a copy of the screenplay, a story synopsis, and a shooting schedule. These should be sent to the Film Licensing Officer, Kenya Film Commission. Filming permits for features, documentaries, short films, music videos, corporate videos, and commercials are issued within minutes of application. Applications for TV Series and full-length feature films are processed in less than 48 hours (2 to 3 days) of application. Contact us at Film crew fixers Uganda we will be able to help you process the filming permissions with the Local Authorities in Kenya.

Filming fees and costs to film rhinos in Kenya

The following charges are applied for filming the rhinos in Kenya:

Film Crew Fixers Uganda will help you organize transport for film crews to film rhinos in Kenya depending on their chosen filming location interest, budget, and the nature of roads in such selected locations to film in the park. We recommend Customized 4×4 Land Cruisers which costs from USD200-350 per vehicle per day with Driver/Fixer or 4×4 Safari Vans from USD200 per Van per day with driver/Fixer. For us to estimate how much it will cost in terms of fuel, we will need to look at your filming schedule to establish mileage and distance to be traveled.

Fixers in Kenya to help you film rhinos in Kenya

Lodge options to stay in during filming rhinos in Kenya range from Budget, mid-range to luxury options. You will choose what to stay in depending on your interests and budget. Contact us here for details.

What is the best time to film rhinos in Kenya?

Filming rhinos in Kenya is done throughout the year and the best time is during the months of December to February and then June to October which is relatively drier than March to May and November this offers great sightings and easy shoots.

Why use Film crew fixers Uganda to film rhinos in Kenya

Film crew Fixers is a local fixer company based in Uganda, we assist filming companies and Production agencies in Uganda and East Africa as a whole for the last 8 years. We handle all fixer services required with our professional team of local fixers and driver guides. We have all relevant connections with other service providers and government agencies to make sure that accreditation and filming permits in Kenya are processed in the shortest time possible. Contact us for details and all relevant information you would like to know for successful filming rhinos in Kenya.